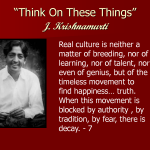 The timeless classics like the Vedas, Upanishads, Sutras and The Gita are “must reads” because they are a window into the rich world of ancient yoga culture, language and thinking.  These classics of the yogic tradition have endured through countless ages and spread through so many cultures right along with the yoga practices such as asana and pranayama.

The philosophical traditions of yoga are experiential philosophies, meaning they aren’t inventions or dogmas, but a human art born out of everyday existence, or as my teacher Erich Schiffmann says, “the art of living.”

They evolve and adapt in the same way as people because they are based in the experiences people actually have when they look deeply and honestly into themselves– in meditation, postures, chanting or practicing breath– for example. The insights that arise can be allowed to springboard into life.

As modern yogis we want to maintain the old forms while also practicing them authentically in the post-Darwin, internet age we actually live in– rather than nostalgically attempting to recreate an archaic life based on a bygone age.

To “be here now” is the beginning and end of yoga practice.  Looking back into history keeps us connected to our past, but we also must connect to the present– to BE present, now– open to the insights we have on our mats, and in our lives.

The very first yogis weren’t looking back into an earlier age. They were present and aware of what they were experiencing in the moment.  They had the entire untouched wilderness of consciousness to discover.  The teachings yogis have continually adapted and refined and passed down through the ages have been seen with fresh eyes, minds and hearts– again and again.

Ideas such as karma and reincarnation came out of their sincere inquiry and were conscious attempts to embrace and explain the mystery of life and death experience.

Today these concepts are still relevant symbols of ethical living and the natural world.  They might not be fact, but they contain truth.  In the mind of a modern yogi, these older forms sit as a bedrock upon which concepts of modern science, psychology and spirituality can rest and continue to evolve from.

The yoga tradition is a living one of continuous awakening and reawakening– a human tower extending through the ages.

Here are 10 books that have helped me give myself permission to adapt the classical forms of practice into my own life, in THIS time, place and atmosphere. They continue to help me refine my thinking and practice and will never grow old to me.  They aren’t listed in order of importance or relevancy, but do flow in a nice line of thought.

1.  Think on These Things, Krishnamurti

4. Yoga: The Spirit and Practice of Moving into Stillness, Erich Schiffmann

…Because Siddhartha Gautama, the man known in legend as “The Buddha,” was a yogi and because his awakening was born out of his practice (including his own skepticism of his practice) and because the intermingling of the two traditions have revitalized both, the last 5 are modern explorations of the Buddhist tradition and the practice of meditation.

9. A Path With Heart, Jack Kornfield

10. World as Lover, World as Self, Joanna Macy

I’ll close with a quote from the final book in the list which is an insight into the “yoga” of environmentalism and political activism often referred to as “green yoga.”  It perfectly embodies the spirit I hope to offer in this blogpost. Namaste.

…I used to think that I ended with my skin, that everything within the skin was me and everything outside the skin was not. But now you’ve read these words, and the concepts they represent are reaching your cortex, so ‘the process’ that is me now extends as far as you.

And where, for that matter, did this process begin? I certainly can trace it to my teachers, some of whom I never met, and to my husband and children, who give me courage and support to do the work I do, and to the plant and animal beings who sustain my body.

What I am, as systems theorists have helped me see, is a “flow-through.” I am a flow-through of matter, energy, and information, which is transformed in turn by my own experiences and intentions.

To experience the world as an extended self and its story as our own extended story involves no surrender or eclipse of our individuality. The liver, leg, and lung that are “mine” are highly distinct from each other, thank goodness, and each has a distinctive role to play. The larger selfness we discover today is not an undifferentiated unity. Our recognition of this may be the third part of an unfolding of consciousness that began a long time ago, like the third movement of a symphony.

In the first movement, our infancy as a species, we felt no separation from the natural world around us. Trees, rocks, and plants surrounded us with a living presence as intimate and pulsing as our own bodies. In that primal intimacy, which anthropologists call “participation mystique,” we were as one with our world as a child in the mother’s womb.

Then self-consciousness arose and gave us distance on our world. We needed that distance in order to make decisions and strategies, in order to measure, judge, and to monitor our judgments. With the emergence of free-will, the fall out of the Garden of Eden, the second movement began – the lonely and heroic journey of the ego.

Nowadays, yearning to reclaim a sense of wholeness, some of us tend to disparage that movement of separation from nature, but it brought great gains for which we can be grateful. The distanced and observing eye brought us tools of science, and a priceless view of the vast, orderly intricacy of our world. The recognition of our individuality brought us trial by jury and the Bill of Rights.

Now, harvesting these gains, we are ready to return. The third movement begins. Having gained distance and sophistication of perception, we can turn and recognize who we have been all along. Now it can dawn on us: we are our world knowing itself. We can relinquish our separateness. We can come home again – and participate in our world in a richer, more responsible and poignantly beautiful way than before, in our infancy… ”      –Joanna Macy, World as Lover World as Self

Meditative Eye Postures: not only are they a thing, they’ve been around for aeons.