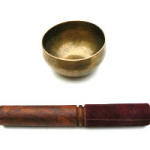 My little “bell”- as I call it- is something of an instrument and something of a voice- yet it is neither. It represents the traditional Tibetan “singing” bowl, a Buddhist object used for thousands of years in the Himalayan regions of Tibet and Nepal. The metal bowls, when struck with a wooden stick, release circular waves of sound that assist

The sound of the bowl represents the sound of mind/heart- a thought, or feeling for example.  The wave of the sound is likened to the wavelike movement of a thought or feeling, and/or the way the impact of a thought/feeling spreads outward, influencing more thought, feeling or action.  The silence represents the ability to become quiet and “empty.”  To make still the swirling waving of thought and feeling. The absence of sound is said to contain everything and nothing that can be thought and felt in the universe.

Previous Roam if you want to. Inner Wilderness awaiting you.
Next Regarding the Glamour of the New

Your Spiritual Community in Conflict: Not Always a Bad Thing + A Meditation

How do You Roll from Here?

Ways of Getting Centered