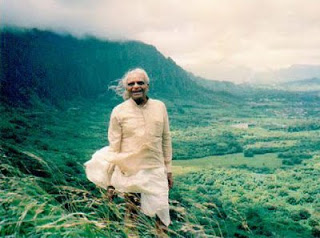 If you follow yoga news, you probably know that BKS Iyengar is no longer with us.

Hearing this news, I had to drop what I was doing and reflect. I imagine so many other people all over the world did the same.

I’m fortunate enough to have practiced on two occasions with Pattabhi Jois. (First time was in NYC, days after the 9–11 tragedy— a story for another time).

Unfortunately, I never found the opportunity to practice in-person with Mister Iyengar.

Yet, even without ever practicing in his presence, Mister Iyengar was the Modern Yoga Father who influenced me the most.

I think of Iyengar as the Yoga-Father who always showed up, did the work, dealt head-on with the mess the rest of us wanted to ignore and then did his damnedest to inspire us to do better.

Besides bringing yoga to the West, Iyengar is credited with designing most of our basic props, defining our core principles of alignment, teaching us how to play our edges while avoiding injury, how to act with yogic integrity, to look inwardly despite fear and to be honest about what we observe.

There are many stories of his impatience, harsh words and intimidating energy. His presence literally made some people tremble.

To me, he seems to have felt a huge responsibility for all the billions of us, some of whom would never know his name, but would nonetheless practice a yoga shaped by his hands.

Someone had to be the relentless stickler for detail. He was willing, and very VERY able to be that stickler.

For our sake, and maybe his own, he was willing to risk being misrepresented as unspiritual or obsessively technical.

I’m sure countless people have avoided hip replacements and every kind of hospitalization a yogi can experience because Iyengar was so stubborn and meticulous.

And countless people like me have been able to make a living as Yogis, sharing what we learn from our own practice with others, getting paid for what we’d already do for free, helping the world to be better in our own way.

Iyengar was just as human and flawed as all of us. Yet, he embodied his mission like a force of nature. He seems to have never looked back.

So, briefly circling back to reading the news of his passing…

On different evenings, a few days apart, I sat at my laptop and read 2 Facebook status updates from Judith Lasater…

The first said that Mister Iyengar had been hospitalized for very critical but unspecified reasons. The second, a few days later, said he was no longer with us in body.

After the second and final update, I paused, rapidly sank into a brief but muddy flood of emotion followed by clear memories of stories his students (my teachers) had told me about him. What leapt out of the stories was his no-BS way of speaking.

“WHEN I PRACTICE, I’M A PHILOSOPHER. WHEN I TEACH, I’M A SCIENTIST. WHEN I DEMONSTRATE, I’M AN ARTIST.”

SOMEONE TOLD ME HE ONCE ADVISED THEM, “STOP TRYING TO POUNCE ON POSTURES LIKE THE TIGER SNATCHES THE DEER.”

IMAGINE HIS STERN VOICE AND FURROWED BROW AS HE DECLARES, “BREATH IS THE KING OF THE MIND.”

He reached deep for the slippery roots and the darker matter of practice. Drawing out mystery, he forged simple, stark, plainly spoken nuggets of wisdom.

Iyengar pushed us to keep digging, to never settle for surfaces, while discouraging us from the temptation to impress or mystify ourselves and our students.

I now realize how much these lessons keep me semi-upright as I schlep through the raw poetic mess of my own practice or guide others in theirs.

Coincidentally (or not), during Iyengar’s last days, I was in the process of writing a blogpost called, “Meditate Like the Lovechild of an Artist and Scientist“.

In writing this post, I was trying to make sense of some of the more unconscious work we do internally as we practice meditation.

Originally, I had planned to share “Meditate Like the Lovechild of an Artist and Scientist” in late September.

But, it seemed appropriate to put aside the work I had planned to do these last few days in order to polish up the post and share it with you today, along with these reflections of Iyengar’s special gifts.

Both of the posts (including this one) in this newsletter are the best I can do at this time to pay tribute to BKS Iyengar. I hope reading them is meaningful for you.

In gratitude to the Philosopher, Artist and Scientist who lived inside BKS Iyengar.

His departure truly marks the end of an era.

Thank you, Sir, for your naked honesty, for having the nerve to be so influential, for creating and creating, for relentlessly showing up, fiercely doing the work and sharing the work with us– all of it, to the very end.Namaste.

Atypical: 5 Reasons Why it Sticks

Writers for the New Paradigm

What I Did While My Digital Lantern was Dim